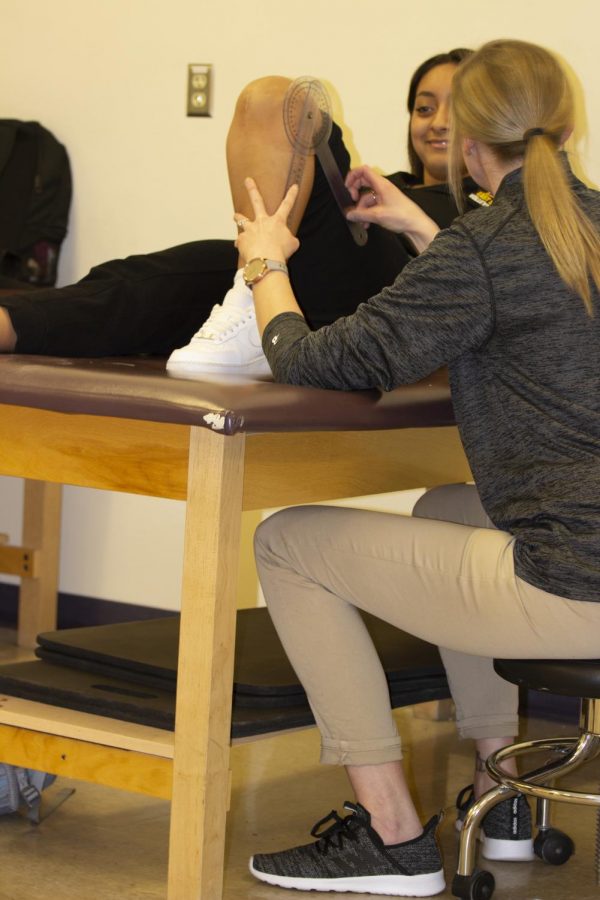 Athletic trainer Mandy Louderback checks a student’s knee using a measuring tool, called a goniometer. Louderback uses it to assess range of motion in joints and determine progress made during therapy.

Louderback says she does, “anything from injury prevention to evaluation of injuries, doing taping and rehab. If there’s anything that we don’t know what to do, making referrals to different specialties or physicians, just sort of anything that has to do with injuries and illness around sports and helping kids get back to what they want to be doing.”

While it may seem like seeing the athletic trainer is something athletes should only do when they’re so injured they can’t play, the athletic trainer’s office is actually well equipped for all athletes.
“Anybody that’s in a sport at least can come in for anything. If they think they have a problem, or they think they have an injury, they can come in and we’ll talk about it,” Louderback said.
In high school, Louderback played basketball and did track and field, and she continues to spend time with athletes because of the connections she has made and the people she gets to spend time with.

“I like the relationships you make with the students and just sort of the athletics community in general and just getting to know people, kids and their families and being around them. It’s pretty cool,” Louderback said.

Louderback enjoys her job here not only because of the athletic aspect, but also because of the school where she gets to work.
“The Eastside community is so much closer than a lot of other schools, in my experience, so just being a part of that, I think, is pretty cool,” Louderback said. “…I grew up in an area that was not very diverse and went to college in a town that wasn’t very diverse, so coming here and just learning about people and different cultures, I learned a lot.”
Above all, Louderback wants to let all athletes know that her office is not a scary place to be.

“A lot of people avoid coming to see me because they think I’m just going to sit them out. But there’s a lot of things that we can do to work with you on your injuries to keep you going in your sport or to get you back into it sooner than maybe you would have just trying to work through things on your own,” Louderback said. “I think the biggest thing is just realizing I’m not just here to sit you out. I want you to be in your sport, and I want to get you back in as soon as I can. Just realizing that I’m on your side.”